Probably the most interesting piece of news is to report that the largest brown trout of the season at 6lbs was caught this month on Reach 13 by one of our committee members. As you will be aware this reach is opposite Avon Springs fishery at Durrington, and is known to hold big rainbows in high flow years when they manage to escape from the lake. However a brown trout of that size is very unusual anywhere on our water, and it is interesting to note that these big fish are normally found in the lower beats (11 to 14) where there are some very deep holes. This particular fish was seen, stalked and after almost an hour of patient fly-changing hooked and landed on a nymph modelled on the caddis larvae that our river monitoring team are regularly turning up in their kick samples. I have persuaded the triumphant member to let us all see this fly which is of his own design and tying. It will not be easy to copy as I suspect camel hair does not feature in the array of material that the fly-dressers among our members have collected! 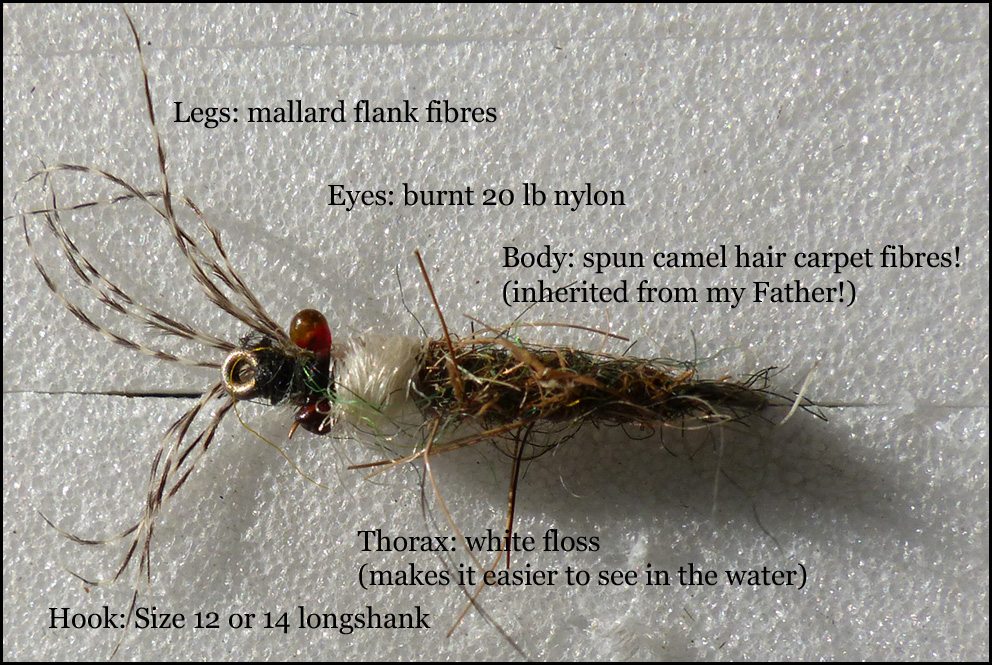 The river is now at its lowest, and the fish have dropped back into the deeper and slacker sections of the river. The weir pools (including Haxton where we permit village children to fish), the deep stretches downstream of Choulston bridge and upstream of the Gated Crossing on Reach7, the newly restored stretch upstream of Gunville, and the holes downstream of C Crossing have all produced good results. Surprisingly, given how intensively it has been fished throughout the season, the stretch upstream of Figheldean road bridge has been fishing exceptionally well. A guest caught his limit there in under two hours recently using a small weighted nymph, and he reported that the stretch holds some very large fish, both trout and grayling. The best time seems to be late morning – sadly not helpful for many of our members except at weekends.  But the trout are extremely spooky in the low, clear water and there is no doubt that those who are prepared to wade quietly up the margins are at an advantage over those who fish from the bank.

Corfe End Lakes have also suffered from the low water as there is no through-flow at the moment. Nevertheless one of the lakes is completely clear of weed and algae and has been fishing well. The rainbows there are in very good condition and are quite excellent eating.

Although I have been away for part of the month I am a bit disappointed with our fly hatches which usually improve towards the end of the season. Given the very healthy results in the invertebrate counts reported by our river monitoring team under Steve Perkins, I would have expected to see some big hatches of olives in the evening. When fly does appear then the fish respond, but on the whole those who are confident in fishing a nymph seem to have the most success at the moment, and I have not heard of any really prolific fly hatches. Perhaps anyone who has experienced these while I have been away would let me know time and place. But to balance that disappointment many of you will have heard the extraordinary news that the Upper Avon is now rated superior in river condition and abundance of invertebrate life to both the Test and the Itchen. I think this is mainly due to the amount of time, money and effort that has gone into restoration work throughout the catchment since the mid-1990s, and in which we have taken part enthusiastically. It is nice to see that effort rewarded.

Although the trout season ends on the river on 14 October you may have seen that the Committee has amended the rules on grayling fishing, extending it until 1st March and making the whole fishery available rather than just the lower beats. It will be interesting to see the results of this decision and I know for certain that we have some extremely large grayling in our water. Please do keep the catch returns coming in for grayling, and indeed for Corfe End Lakes which remain open for the rainbows until 31 December.

I would also add that anyone who would like to assist in catching pike during the winter should give me a ring to discuss likely places and effective methods. We are not going to electric fish for pike this autumn so all culling by other means will be most welcome.

I will not attempt a summary of the season at this stage as this is kept for the reports at the AGM in March, and I will now cease the monthly reports until next April. But I do hope you have all enjoyed the fishing this year. It has been a text book season in many respects. The river has been in very good condition from start to finish, we had virtually no algal bloom in the spring and the weed growth was exactly as expected, and far healthier than in other parts of the catchment. I was pleased with the outcome of the June weed cut and we continue to be blessed with a wonderful Mayfly hatch. Nevertheless I know the committee would welcome all suggestions, criticisms or concerns, so please do pass these either to the Secretary or if you prefer, directly to me.

But there is a few days to go – why not give it one more try!