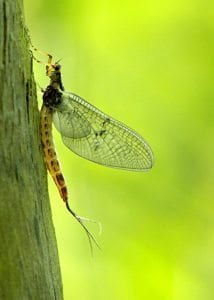 Although I was away on holiday for the last week of May (and I can thoroughly recommend the Isle of Man for those who have never been there) I saw enough before I left, and have heard more on return, to justify the very optimistic outlook which we all proclaimed for the Mayfly hatch this year. We are probably now just past the peak of it, as there is apparently already a good fall of spent fly in the evenings. We tend to neglect this on our water, but a warm, still late evening at the moment should produce excellent sport if your fly box holds some reliable spent patterns.

Although many of our members have caught their limit with ease, surprisingly we have not heard of any really big fish so far. I know that there is one 3 plus pounder upstream of Gunville on Reach 10, but although he feeds very energetically in mid stream, he must have had a recent unhappy experience as he will not be tempted by any of the patterns thrown at him. But do let me know if you get hold of a specimen fish – trout or grayling, and as I always plead, do be conscientious in entering your catch returns on the web site. It helps the management a lot, particularly when we come to re-stock in mid-summer.

The river is in wonderful order – probably looking its best that I have seen it over the past ten years or so. The only fly in the ointment is that we are hosting a pack of eight or nine juvenile swans between Gunville and the Cemetery meadows (Reaches 11 and 12). These have already trashed the ranunculus weed over most of that stretch, but the territorial pairs, which we encourage, are keeping them confined to that part of the river. Our old friend Rambo, whose mate is on her nest just downstream of Figheldean bridge on the left bank, has been doing a great job in keeping these young first-year birds away from the core area of the Fishery. This is a very welcome change from attacking our members, a sport which he enjoys immensely. But as many of you will know, for some years the Wiltshire Fishery Association river keepers have been licensed by Natural England to reduce the clutch size of mute swan nests across the whole of the Upper Avon catchment, and this policy has made a huge difference to the health of the rivers. Ranunculus (or water crowfoot) which is the main food source for swans is really the engine room of a chalk stream – without it the river “crashes” very quickly and becomes a brown, muddy ditch and in some places swan damage has been devastating.

That said, I am afraid that June is the month of the main weed cut. This has to be done, otherwise the channel becomes completely blocked, pushing the river on to the banks and even into the meadows. There are already very big weed blocks on Reaches 6, 7 and 8 which I will start to tackle on or just after 15 June. To start with, the weed cut will not affect the fishing except immediately around where the cut is taking place, and if you have a guest fishing and want to know which part of the river to avoid, by all means give me a ring. The clear-down is a different matter – but this will not take place until the very end of the month, and even then the obvious course of action is to move upstream of the clear-down work party.

On a completely different subject, I hold a number of old fishing books which were given to the Association many years ago, and which the Committee has decided to sell to our members as they will otherwise continue to gather dust. The Secretary will put a list of these onto the Web Site Bulletin Board, and they can go to the highest bidder which, looking at the same titles on Amazon, is not likely to be very high! Any funds arising will go to the Association maintenance fund and the book can be collected from me on the river given prior warning.

Similarly one or two new members have asked for a hard copy of Charles Tarver’s excellent illustrated pamphlet about the Fishery “A Guide to Newcomers”. Before we launched the web site every new member was given a copy of this. However various rule changes have been made since this was published in 2006 and Charles has now updated this. The updated version is on the web site. But that is not illustrated, and the hard copy will probably become a sought-after rarity in years to come, so if any member would like to have a copy of the 2006 version, we have put a box of these in the Corfe End Lakes fishing hut. They are free.

Finally remember you are now allowed to wade throughout the whole fishery which should give an advantage for those who do not want to struggle through the jungle on the non-fishing (east) bank. Do let me know if you encounter any difficulties but I am optimistic that the season will continue to maintain the high standard with which it has started.