I hope you do not think I am paying too much attention to the statistics of the catch returns, but I have to say that I was once again very surprised indeed by the results for June. This is often a rather difficult and disappointing month and on the face of it this year seemed to be no different: the weather moved from one extreme (bright and very hot in the first week), to the other (wet, cool and windy in the second and third week) which once again coloured up the river. But it is quite obvious that the fishing has been exceptional. Not only was the return of takeable brown trout at 555 not far off matching the May total, but the wild (under-sized) return held up well at 220. There were some big browns caught too, one over 5lbs and several up to 4lbs, while a huge rainbow (estimated at between 7and 8lbs) was lost on Reach 9 and another, also described as “a bruiser”, landed on Reach 14. One of our former Chairmen paid us a great compliment too, after his day on the 11th June: “One of the most enjoyable day’s fishing I have ever had the privilege of experiencing on our water”.

I think several factors combined to give such great fishing in June. The river is well-stocked and further supported by a strong wild population of brown trout. The peak of the Mayfly hatch was late because of the effect of cold weather in April and early May and it continued strongly through June with the hatches gradually losing abundance and becoming much more localised only in the final ten days. A fairly light weed cut was all that was needed this year, and the lift in water in the middle of the month helped to clear cut weed downstream. That lift also coloured the river but this actually provided an advantage in terms of making an approach to a rising fish and also in fly presentation. The generally cloudy weather helped in this too. So it does seem to have been a win-win situation!

To my satisfaction the grayling catches were also healthy enough with a fair spread of size (although nothing reported over 2lbs) and a total for the month of 226. This is important because those of you who are members of the Game and Wildlife Conservation Trust (the old Game Conservancy) will have read their report on their research project into a serious decline of grayling on the Wylye. Despite all their detailed research no obvious single reason for the decline has emerged, and looking at our own grayling returns over the same period it does seem that here on the Upper Avon the fish are tremendously sensitive to adverse spawning conditions in March and April. Consequently their abundance, and your catch returns, are highly variable: for example the annual grayling return in 2008 was 1781, then down to 479 in 2012 and back up to 1932 in 2017. So perhaps we should expect the population to be cyclical. But in my opinion there is a lot of truth in the old saying that grayling are the “canaries” of a chalk stream, and we do need to watch their numbers carefully. Apart from anything else it would be a very dull river indeed if they all disappeared.

The arguments over the most effective Mayfly patterns continue. At the start of the period of big hatches fish are obviously less “picky” – hence “duffers fortnight” – but it is clear once again this year from the catch returns that once a trout  has been pricked or actually caught and returned, not surprisingly they become much less easy to deceive. In those circumstances (again mentioned by one or two of you in the catch returns) a quick change to a small olive emerger or caddis imitation, or indeed a nymph, will take a feeding fish that resolutely ignores a succession of different dry Mayfly patterns. So the big, clunky patterns sold in Orvis or Robjents may well be very effective to start with, but there is a lot of rod pressure on our water, and it is not surprising that those patterns become much less effective as the hatch moves on simply because they become associated with an unpleasant experience.

I have always believed that size is more important than pattern in any case, and as I have said before I think the old-fashioned heavily dressed olive imitations are generally much less attractive than some of the modern, skimpily tied emergers and cripples. The now widespread use of cul-de-canard on these flies is probably as important a break-through in fly-tying as the arrival of the gold-head beads over thirty years ago. I will show you a photo of an emerger which one of our committee members says was “almost irresistible” in the circumstances described above: 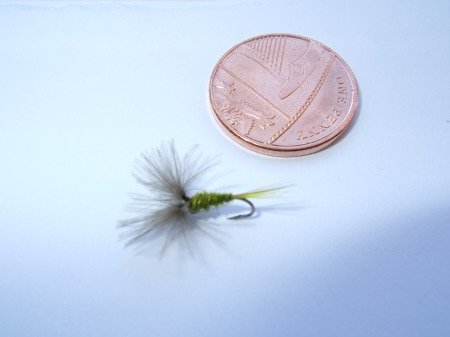 You cannot get much more simple than that: two tufts of c-de-c, no hackle, nicely tapered body and a hint of a tail – it probably took less than 5 minutes to tie!

One of the other advantages that we experienced in June was the relatively few days of hot weather. However there has still been the now customary flush of dog walkers, wild swimmers and paddle boarders whenever the sun appeared. The tank crossings and the mill pools have been the focus of most of this unattractivel behaviour – as one return commented “.. I suppose C Crossing is the only alternative if Portugal is not possible...”! But thank you for using the new column in the catch returns to report these incidents. This is really useful as evidence to our landlords (DIO) that our fishery is not protected in the same way that private estates enjoy, and that our rent should therefore reflect this. There is no doubt that the MOD police have been a useful deterrent too, and the committee is grateful to you for cooperating so pleasantly with them.

As far as poaching is concerned, I think this is less of a concern at the moment. But you will have had the Hon Secretary’s e-mail of 4 June spelling out exactly what action to take in the event you do encounter this, so I will not repeat it here.

Hopefully the action we have taken over security of cars, in particular at the Gated Crossing, has been effective; at any rate there have been no further incidents there despite some rather futile attempts to vandalise our notice boards. However I do have one plea over cars, and this is to park as considerately as you can – for example at the Gated Crossing please do back into the parking place at right angles to the track otherwise nobody else can get in there!

The very best of luck for July – let us hope that this wonderful season continues in the same way, and do keep all those great comments coming in on all your returns.