In my notes last month I said that it will be interesting to see what the August returns produce, and indeed that is the case. I do not think I have ever seen the river in better condition in August than it has been this season, and the magical number crunching which our Hon Sec culls from your returns show this to be absolutely spot on statistically. Although the river has been very lightly fished (certainly compared to the rod pressures in May and June), the total for all categories of brown trout – killed, returned and undersized – is 279. This may seem a modest figure compared to those spring returns, but the Hon Sec has proved that this is almost double the total for any recent August, and (rejoice, rejoice!) the number of wild (undersized) browns returned in the month is indeed well over twice any previous year. Grayling, too, appear to be in a very healthy state with 437 returned including some very respectable weights.

The reasons for this happy state of affairs are varied, and I cannot claim that management is a key factor as in fact the weather has been probably the most powerful influence. We have had a lot of cloud, moderate air temperatures and some significant rain, although not enough to put the river out of order (those of us with experience of north country rivers delight to see that sherry stain in the water). Air temperatures in particular have not been what the climate change doom-mongers predicted. One of our more conscientious rods has also been taking water temperature, which he recorded in mid-month as low as 10.5C – around 50F and way down from July. As ground water breaks from the springs at just below this temperature, that is remarkably low for August, and undoubtedly helps to maintain the river in a healthy state. Normally by now we would be seeing a lot of cress building out into the main channel as seen in hot summers and low flows. As you know, the chalk stream cycle compensates for low flows by using cress to narrow the channel – sometimes to a remarkable extent – and thus inducing more energy, pace and oxygenation into the flow. Not so this year so far, however, and in a lot of places ranunculus is still playing its part in maintaining water condition and a healthy channel.

So the outcome from all that is hopefully to encourage you to get down to the river during the last 6 weeks of the season, which some of our most experienced rods maintain is the most interesting time of all on our fishery – and I am among them!

Some of you will have picked up the very encouraging news of an upturn in the migratory fish run this year on the Avon. In the days when we were permitted to electro-fish for pike in October we used to turn over the occasional salmon, and from time to time I have certainly seen evidence of very large redds cut into the gravels in December which could only be made by salmon. So it was encouraging to hear that in early August the Environment Agency found conclusive proof of successful breeding in our water during their routine annual check of fish populations on various Upper Avon fisheries. They captured both trout and salmon parr downstream of Figheldean road bridge – see photo below: 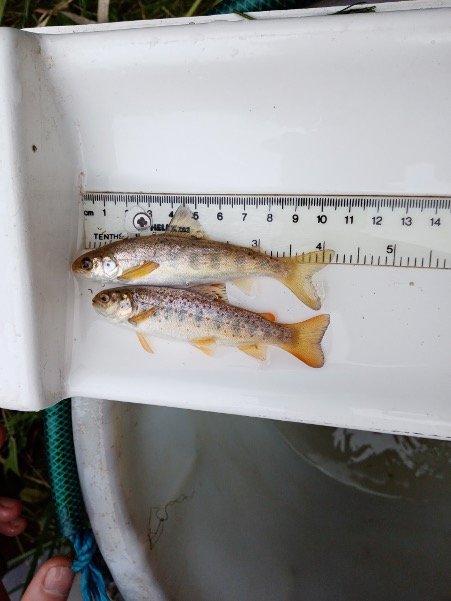 It is worth noticing the difference for any future reports you may make. The salmon parr is the top fish with deeply forked tail and a spot on the gill cover; the trout is the lower fish.

Your returns indicate that there has been very little change from July in choice of successful fly patterns. But as we move towards autumn there are a few reminders that are worth making:

I hope you enjoy these last weeks of the season. I will report again in mid-October, but I am fairly confident that you will all be pleased with the statistics of the 2021 season!